There’s a good sale on San Fran to West Palm Beach, FL (vice versa) for $287 on United Airlines. Must travel by March 31, 2014. Purchase at least 14 days in advance of departure.

Accidents during flying isn’t anything new. With the recent barrage of news regarding incidents, I want to share some things I always try to do when I’m flying.

1. Carry sanitizer wipes on board and wipe everything that you think you will touch with your hands. Common things I wipe are, armrests, tray tables, and remotes.

2. Always put your seatbelts on even if the seatbelt light is off. Even during clear skies, unexpected turbulance is very common. It has happened to myself and just within this week, United Airlines and Cathay Pacific had injuries.
If it’s a rough ride I make sure the belt is tight and I make sure my shirt is underneath the belt so I do not get cuts from the belt if things go bad. If the seatbelt light is off, I loosen the belt so one of my hands can fit through.

3. Always keep your shoes on during take off and until the plane is in cruising altitude. I also keep my shoes on during landing. If the plane has an emergency landing you do not want to be caught with no shoes on, making escaping the plane more difficult.

4. Never drink too much. This is for safety reasons. If the plane has an emergency and I’m inebriated, I’m putting myself, my family/friends, other flyers/crews in danger. Keep in mind that alcohol affects you faster in higher altitude as well.

5. Keep my mobile phone fully charged. If there is no charging port on my seat, I keep my phone off during the duration of the flight.

The plane was hijacked one hour after take-off. This is how it went down.
After entering the plane, I went to my seat: economy class, window-side and next to the right wing. As it was around midnight, I quickly fell asleep during take-off. I was waken up an hour later due to the sound of all the oxygen mask going down. I immediatly thought « what the… » I looked at my neighbor, she seemed as confused at me: the plane was not behaving oddly so I thought it was a simple technical glitch or somebody pressed the wrong button. Everybody looked at each other, thinking what’s going on. Suddenly, a deep and angry voice talked through the cabin radio: “SIT DOWN, PUT YOUR MASKS ON, I’M CUTTING THE OXYGEN”, three times. At this point, I realized that the situation is serious: someone is in the pilot cabin and has hijacked the plane. Within a few seconds, the oxygen went down in the cabin: I felt very lightheaded and quickly decided to put on the oxygen mask like the rest of the passengers. Quickly after that, the plane suddenly started dropping down for about 8 seconds then went fast back up, then finally stablized. People were crying, yelling, praying. I was in complete panic. Cold. We were then waiting for an update, an information, what was going on. But it never came. We flew for 6 more hours, knowing only that a pirate was at command. Who was he, what was his intentions ? I started thinking, too far. For he was probably alone, he couldn’t possibly be planning to land at an airport, he would immediatly get caught. So I quickly took away the possibilty of landing safely. As I was looking throught the window, all I could see was dark. Dark up, dark down.

Yesterday, Ethiopian Flight 702 departing from Addis Ababa Bole International Airport (ADD) with destination to Rome (FCO) was hijacked. The aircraft sent out beacon code 7500, which is code for Aircraft Hijacking.

The aircraft flew past its destination, FCO Airport, and headed for Geneva, Switzerland. At one point dropped to 12,000′ from over 16,000′ within a minute. Started leveling the aircraft at 7,000′ and repeatedly circled Geneva Airport.

Minutes before the aircraft landed, one of the engine flamed out and they had only few minutes of fuel left. Once landed, the pilots deplaned via the cockpit windows.
It has been reported that one man is in custody and all 200 passengers and crew on board the plane were in good health.

The reason for the hijacking remains unclear, although there are unconfirmed reports that at least some of those on board the aircraft may have been asking for asylum. Appears one of the pilot hijacked his own plane.

You can hear some of the inflight communication, CLICK HERE

Below is a transcript of some communication:
04:40Z: ETH702 is currently on tower frequency 118.70. It is using the callsign KK001 (could be the escort’s callsign). The aircraft has requested asylum. Tower has responded that they are working on the request but there is a delay “because everyone is asleep” (5am local time).

04:44Z: Aircraft is back on Geneva Approach.

04:51Z: Geneva Appr: “I know you will not land without a response, but can I give you vectors for the ILS?”

04:56Z: ATC: “We have someone on the phone and will give you a response on short final. Descend to 4000, capture the glideslope.”

05:10Z: Pilots stated they would be leaving the cockpit via the windows.

05:18Z: Geneva Tower to inquiring aircraft: “There is an incident going on, so for now, the Geneva Airport and aircspace is closed.”

05:31Z: UAL148 inbound to Geneva from Newark has made an 180 turn over France. It appears to be diverting northwest in the general direction of Paris. It is now holding.

05:32Z: ATC: “We plan on opening the airport at 7am local. The aircraft is still blocking the runway.”

05:38Z: Etihad 053 from Abu Dhabi has been diverted to Milan Malpensa.

06:01: ATC: “We have no further information on the situation. The airport is still closed and we are taking it hour by hour. The aircraft is still blocking the runway.”

06:53Z: One hijacker has been arrested, sources indicate situation is under control.

06:55Z: ATC has started to issue clearances again. ATC is asking pilots if they are ready to depart.

06:58Z: Police stated that the pilot has been arrested. Hijacked his own flight to declare asylum.

07:28Z: The first aircraft have departed since the airport has reopened. Operations are back to normal.

Visa Requirements: US Citizen not required

Enjoy more for less when you stay at our hotels this spring, with up to 30% off your booking! Whether you are looking for a weekend city break in Europe to see the sights or just wanting to get away from it all, we have the perfect room for you.

Book now until February 28, for a stay in any of our 500 participating IHG hotels (including Crowne Plaza®, Hotel Indigo®, Holiday Inn® and Holiday Inn Express®) on a Friday or Saturday night between March 1 and May 6, and enjoy up to 30% off your stay. Best of all? You can also enjoy the discount from April 14 to April 25 for the Easter holidays. Simply make sure to look for dates at least 21 days ahead.

Fare Availability: Until June 2014. Must purchase at least 7 days prior to departure. Maximum stay is 7 days for Delta and 8 days for Spirit.

Buda Castle
It was a foggy and a rainy day, we started our day off with a nice pizza for breakfast! ha! We couldn’t find anything open so pizza it had to be. I don’t know if it’s just us but in all my travels I had the hardest time finding anything clearly marked in Budapest. We had to walk back and forth few times to find the bus stop that would take us to the Castle Hill. Once we did find the bus stop, it was a nice simple ride. I wish I took a picture of the bus because I thought the bus and the seats were very tiny compared to the ones in New York.

Once we arrived, we could not find the Buda Castle and it wasn’t just us. Everyone on the bus also had a hard time finding it as well. Once again, nothing was clearly marked. I have to say, the Buda Castle is interesting. Interesting in that, I was expecting to see an actual castle. You know, with the towers and arches. Instead, I saw buildings. Now I see why in the past this was called the Royal Palace. I think this name suits it better. My friend and I walked around a bit and took some pictures but quickly decided we would rather spend our time at the Szechenyi Thermal Spa.

We headed back to the bus stop area and once again had a hard time finding the stop that would take us back to where we came from. It must just be us.

Looking over to the Pest Side

Looking at the Pest Side

Szechenyi Thermal Spa
Szechenyi Thermal Spa is the largest medicinal bath in Europe. The water is supplied by two Thermal Springs and the temperatures are between 165 F and 171 F. The Szechenyi Thermal Spa has many indoor spa areas and it also has saunas and steam rooms. I actually got a little lost inside. Outdoor there was 1 sitting pool with streams of water shooting into the pool, 1 adventure pool which was similar to the sitting pool except there was a section in the middle that had a circular wall and once you enter it, you will be going around in circle because of water current that will push you around. There is also a swimming pool. If you don’t want to sit around in water all day, you can also go inside and grab something to eat or drink. The food choices were not that interesting but once you are there for several hours, you will get hungry and have no desire to leave the premise to seek out food elsewhere. Finally, there are body massages and facial spas.

The price for entrance to Szechenyi Thermal Spa is between $16-$21 USD per person at the time of this post. My friend and I tried the facial spa and that set us back about $40-50 for a hour. They recommend you make reservations for any spa treatments but we got lucky and they were able to squeeze was in. We had a great time at this place. It was very relaxing and totally worth the money. Hungary had a hard economic time and your money will go long ways here.

We look so tired

I searched on Orbitz.com. Some other OTA won’t show this price.

Air France has finally updated their Business Class seat to a lie-flat. They will be installing 2,102 of these seats between June 2014 and Summer of 2016 in their Boeing 777, long-haul fleet.

The Air France Business seat was developed with the concept of 3 “F”: 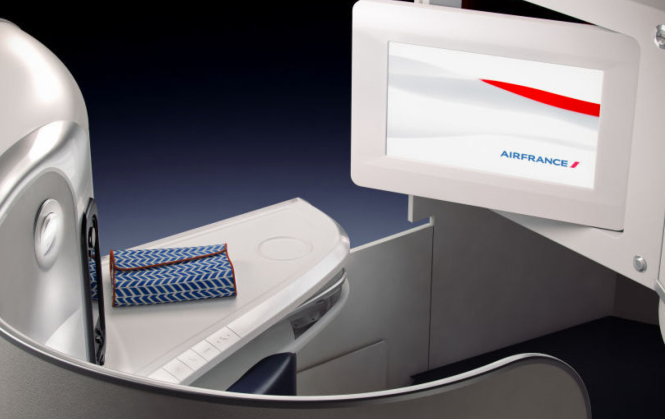 A Cocoon in the Sky

I will be looking forward to this flight once it’s been fully rolled out in 2016!

I'm just a simple average guy that loves traveling and doing it for low cost as possible. I'm here to share that wealth of knowledge.

Travel With YJ
Create a free website or blog at WordPress.com.